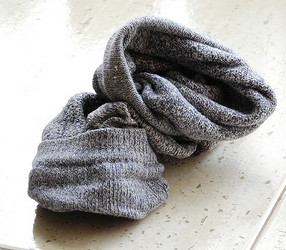 I broke ranks and kind of broke the rules by describing the migration of the term minimalism into the realm of “lifestyle.” Broke the rules, I mean, because at first glance it seems that Donald Judd and Samuel Beckett have little more than a name in common with Real Simple or Simplify magazine or the blog  Minimalist Baker. It feels a bit like comparing the discipline of anthropology and that store with the clothes made from cool fabrics that don’t seem to fit anyone quite right. I could feel John’s non-nominalist hackles (and mine too, if I’m being honest) ready to rise.

Nevertheless, we threw Marie Kondo’s The Life-Changing Magic of Tidying Up into the mix. And adding that book did add to the conversation. Kondo’s version of minimalism, though different in many, maybe most, ways from the other examples in the episode, helped us to talk about things like the intentions of the artist, the experience and sensations of the viewer or reader, ideas of what art is or isn’t supposed to do, and the recategorization of the everyday. In the spirit of the podcast, we were able to use the book as a switch point or maybe a pinball bumper (or maybe a spark?) for a conversation that didn’t necessarily go in the directions that even we expected, and that for that reason, we hope, felt a little fresh and unpredictable.

Since we recorded that episode in October 2018, Marie Kondo has provoked lots more conversations, because of her new Netflix show “Tidying up with Marie Kondo” and the waves of backlash and defense of her method, her approach to books, and her notion of sparking joy, referred to by novelist Anakana Schofield as “woo-woo nonsense.”  By now there have been scores of articles about the show, the KonMari method , the Marie Kondo haters, and haters of the haters.

One thing that really seemed to tick people off was the idea that Kondo tells people not to have more than 30 books. In her takedown of Kondo, Schofield writes that “Tidying guru Marie Kondo advises us to ditch reading we don’t find joyful. But one’s personal library should do much more than anthologise warm feelings” and “Art will be around far longer than Kondo’s books remain in print. Art exists on its own terms and untidy timeline.” Others picked up the Save our Books banner; “Keep your tidy, spark-joy hands off my book piles, Marie Kondo” is the name of one Washington Post article.

These responses now seem to be unwarranted in a couple of ways. First off, it seems that her signature phrase “spark joy” comes from the Japanese tokimeku, which translates more accurately as “throb; palpitate; pulsate; pulse; beat fast.” And when I learned this I was reminded of Tory’s description of a sensation of levitating, ever so slightly, when she walked into a room of paintings by Agnes Martin. At a more elementary level, Marie Kondo doesn’t actually tell anyone how many books they should have. She only says that this is how many books that she has ended up with.

In recent weeks, an evolving discussion touches on whether the criticisms of Kondo are racist or ignorant and dismissive of Japanese culture, as is argued in an article titled “‘Marie Kondo isn’t coming for your books, you’re just being xenophobic” and another  “Marie Kondo’s haters are lowkey starting to get ‘racist'” .  Indeed, I happen to agree that some of these criticisms seem to be at least surprisingly vitriolic and a little snobby.

That isn’t to say I think The Life-Changing Magic of Tidying Up is a very good book, though I stand by what I said in our conversation: I am fond of it. For example, I love her description of socks that are grateful and relieved at finally being folded the way they have wanted to be folded all along. I like a world with those socks in it.

My point, however, is not to claim The Life-Changing Magic of Tidying Up as a great book, but to show how it, like many other books in the world and in our podcast, makes conversations happen,  about an unexpectedly wide range of topics—about race, class, gender, about reading, trash, families, the decline of U.S. global dominance, the liveliness of things and the anxieties of consumption—and not always in ways that we expect.