Public Books recently ran an article called “Our Drugs, Ourselves” by Susan Zieger, that touches on several of the issues that John, Elizabeth, and Gina discussed in our second episode about addiction. Zieger analyzes “the slimy lie at the bottom of ‘drugs’…the false belief that my natural experience is more authentic and valuable than your artificial one.” Zieger looks at this premise in High Price: A Neuroscientist’s Journey of Self-Discovery That Challenges Everything You Know About Drugs and Society, How to Change Your Mind: What the New Science of Psychedelics Teaches Us about Consciousness, Dying, Addiction, Depression and Transcendence by Michael Pollan, and My Year of Rest and Relaxation by Ottessa Moshfegh. Zieger argues that community, and the practice of sharing experiences, are what need to undergird the use of drugs in order to prevent them from being demonized or fetishized. While the Pollan’s and Hart’s take up real-world concerns about addiction and experience of the sort that John, Elizabeth and Gina discussed, I am particularly interested in a phenomenon that Zieger traces in Moshfegh’s novel: the use, in recent(ish) fiction, of fictional drug brands alongside real ones. 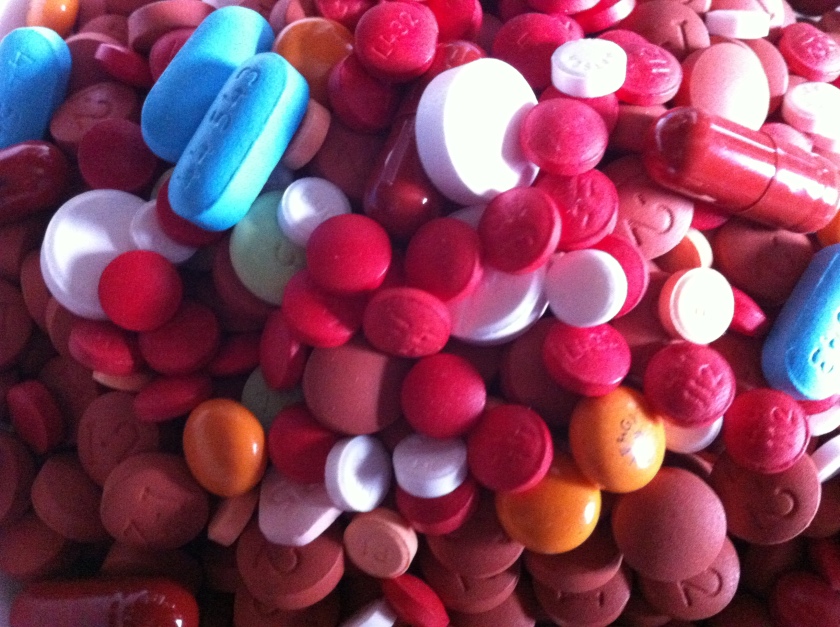 Jonathan Lethem has written recently in the New York Times a set of fictional drugs used in fiction. Drawing a kind of history of these drugs, from the otherworldly psychedelics of Philip K. Dick and Frank Herbert to Moshfegh’s medicine cabinet, Lethem notes an epochal change: “the current generation of fictional drugs, rather than bubbling up from nature’s underworld, parachute into stories and novels from the corporate-technological top down. The recent nightmare drugs–for they are, exclusively, nightmares–are pharmaceuticals.” Which is to say: they have branded names. More than the variegated but simple names that the natural drugs, even when fictional, had (nicknamey abstractions like “spice”), the branded pharmacopeia promises at some level a narrative: a top-down story, with bits of at least feeling if not sense put together to help the drug tell its story. This is true of drugs here in the real world (OxyContin’s continuous release) and the fictional world (George Saunders’s Verbaluce, which makes you verbose and lucid).

There is a distinction to be drawn between the plausibility of these drug names, and the frequent uncanny attribute of ersatz fictions. I think of the run of titles produced by Nabokov’s Sebastian Knight–The Prismatic Bezel, Success, The Funny Mountain, Albinos in Black, The Back of the Moon, Lost Property, The Doubtful Asphodel–all of which share a an ineffable quality of seeming, to me, to be at most 85% real. (Except Success, which turned out, later, to be a book by Martin Amis). I don’t know what, besides familiarity, makes Look at the Harlequins! and King Queen Knave seem more like objects we could find here on this earth than The Doubtful Asphodel, but it nevertheless seems like a keener family resemblance than the one that separates Klonopin from Don DeLillo’s Dylar.

Like fake books, though, the function of these imaginary brands within narratives can serve to direct our own desire for the story–told by a fake drug or a fake book–to make some sense. Aslan, the drug in Jonathan Franzen’s The Corrections, “optimizes”: it “optimizes in sixteen chemical directions,” says Enid’s doctor; “but guess what. Optimal for a person enjoying a luxury cruise isn’t optimal for a person functioning in the workplace. The chemical differences are pretty subtle, but if you’re capable of fine control, why not offer it? Besides Aslan ‘Basic,’ Farmacopea sells eight custom blends. Aslan ‘Ski,’ Aslan ‘Hacker,’ Aslan ‘Performance Ultra,’ Aslan ‘Teen,’ Aslan ‘Club Med,’ Aslan ‘Golden Years,’ and I’m forgetting what? Aslan ‘California.’ Very popular in Europe.” What this list demonstrates, besides Franzen’s being funnier than his reputation as a dour defender of birds would suggest, is that the drug can be sorted into different narrative contexts, and affect the user accordingly.

But it also has a particular effect on readers of The Corrections–the way that the drug appears in the book seems to unite the novel’s relatively disparate threads in a way that nevertheless does not quite cohere. Aslan shows up in multiple other guises in The Corrections–it is also called Mexican A, when Enid’s son Chip encounters it, and her other son and daughter realize that some of the work their father has done in his work as a chemist might give them access to the profit it generates. The more famous literary Aslan–the Christ-like lion–also shows up, in one of Enid’s grandkid’s favorite book series, The Chronicles of Narnia. This operates similarly to DMZ in David Foster Wallace’s Infinite Jest: the drug occurs seemingly more often than it should, and one hopes that this new, unexplained drug–a brand suggesting the demilitarized zone, a place lacking definition–might have as much eventual power to sort things out as the godlike Aslan in The Corrections. The same too could be said of other fictional drugs that blur out the experience of their users, but whose effects we readers hope to eventually understand and sort out their narratives, such as Deborah Eisenberg’s Vexnix, in “Your Duck is My Duck,” and Moshfegh’s Infermiterol.

Ultimately, these fake brands of drugs–slowly revealing what they can and cannot do, structuring the narratives in which they appear–serve to put together meaning for their stories, just as Zieger describes Pollan attempting to do in How to Change Your Mind. The drugs of fiction seem more aware, though, of the potential for abuse: according to his biographer, Wallace considered not marijuana or pills, but television, to be the “real” addiction that he faced in his life. The way that these fake drugs dole out meaning by slowly revealing their effects, their terms, even holding out in Franzen or Wallace the promise of explaining much more–this itself can generate a compulsive, even an addictive readerly experience. As with their chemical analogues, these narratives can prove sites of either overinvestment or neglect, and are therefore best approached–as Zieger notes of drugs–communally. (Approached as, if one were to use a phrase, public books).